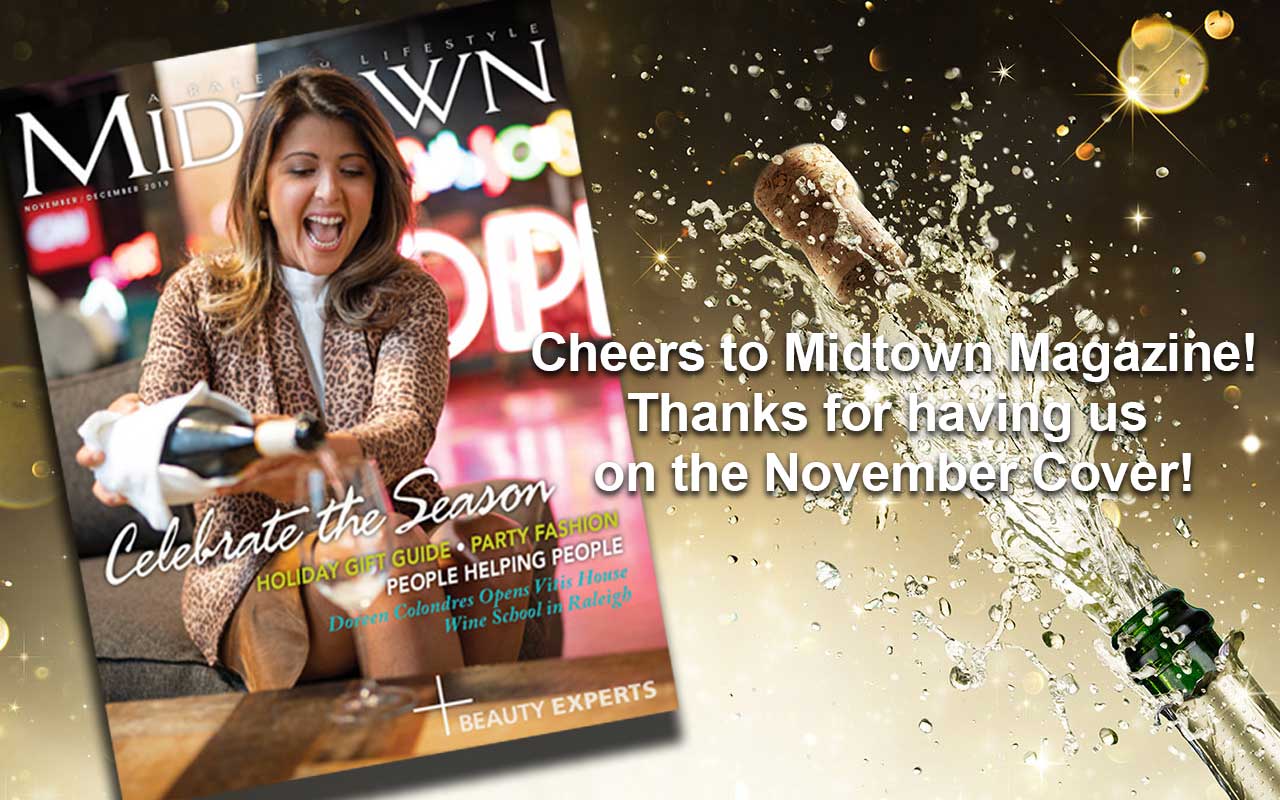 Wine Wisdom or All – Midtown Magazine

A celebrity chef bringsher food and beverage expertise to Raleigh with the Vitis House Wine School.

For many years, Doreen Colondres has been a woman on the go. She breezes into a room with her hands full and a smile on her face, eager to share her story and happy to be coming from her whirlwind, busy life to where she is now.

But for Colondres a celebrity chef who has had her hand in a lot of pots life isn’t slowing down. After years spent as a celebrity chef, a brand and corporate spokesperson, and a multi-platform food and beverage professional via the brand The Kitchen Doesn’t Bite, she is now ready to indulge another passion: Colondres has opened Vitis House Wine School in Raleigh.

This latest venture comes after she recently completed her coursework with the Wine & Spirit Education Trust (WSET), a worldwide organization that offers educational training for professionals in the industry as well as wine enthusiasts.

Raised in Puerto Rico and a longtime Miami resident, Colondres never imagined settling in Raleigh, but that all changed a year ago when she was charmed by a visit to the Triangle. Now she is ready to give up her life of constant travel in hopes that she will leave her signature on the Triangle’s palate.

How did you come to have your love for cooking?

My grandfather was a professional chef. In my grandmother’s family, we used to have 30 different ingredients [growing] in the backyard, so always, food was my passion. I started cooking for my family when I was nine.

How did you get your professional start?

I studied marketing and business and worked in the food industry for a few years, did a lot of cooking classes and tasting for friends at home, and [ultimately] created the brand The Kitchen Doesn’t Bite. From there, I started becoming a celebrity chef, doing cooking shows all over. I had three shows in 16 countries with FOX, in Spanish.

You went to college in Puerto Rico, culinary school in the United States, and you’ve been a brand ambassador for a lot of companies: Frito Lay, Goya, Bumblebee tuna, Barilla pasta. How did you become involved with them?

I was working in promotions in Puerto Rico at 16, and I moved to Miami when I was 23. I was a spokesperson for different brands at food events and conventions. Using my markteting background, I helped create content and recipes, and I helped them approach U.S. markets.

Your other passion is wine, which led you to Raleigh. How did that happen?

Last year one of my clients hired me to do a healthy cooking show for their employees in Raleigh. So I came, and I completely fell in love with the people. I was staying at The Umstead when I got the call from WSET saying that I had passed my Level 3 [test], so I had to go downstairs and ask for some bubbles. I fell in love with the wine I ordered, then I became really good friends with the importer, who is based here in Raleigh. After that, I started calling him and saying, “What about a wine school in North Carolina?” I came back for two or three weeks last October, did some research, and [realized] I like this place! I want to do it. So I went back to Miami and sold everything in two months.

You’ve opened Vitis House Wine School at the Loading Dock in Raleigh, Dock 1053. So, tell us about it.

It is a wine and cooking school, but we’re starting first with the wine. We have classes and courses. The two-hour classes I’ve designed are two hours. It’s not the typical tasting that most people get. It’s a fun tasting, but you’re going to learn a lot. There’s so much to tell of the story behind a city—the history, the winemaking process. But there is nothing formal.

What about the courses, how are they different than classes?

The courses are WSET courses. It’s the most prestigious wine school in the world. They have about 750 program providers like me. They’re designed for wine lovers, people who work in the industry, collectors. Anyone can take the courses. You take an exam at the end. Depending on your score, you will get a pin. That is very important. It is recognized worldwide. If you work in the industry, you’re going to sell more, make more money [when you have that recognition]. You’re going to get a better reputation.

How did your first class go?

Outstanding! WSET celebrated its 50th anniversary recently, so they developed this special course for all the schools to celebrate. It was a pairing course, and it sold out in a week. The most beautiful thing is we had all types of people.: young people, seniors, people of all colors and nationalities. It was really awesome.

Do you have a timetable for cooking classes?

Cooking classes will begin early next year. Each class will be for two hours, with 12 people, and the food will be mostly Mediterranean and Hispanic. I have always dreamed about having my own cooking school. If I’ve been saying to people that the kitchen doesn’t bite, I can’t open a restaurant; it has to be a cooking school, but a fun cooking school.

Yes, and especially in North Carolina. It’s almost ready to explode; it has everything. People are so open to learn and discover new types of food and taste new flavors and ingredients; I think it’s going to be awesome. With my expertise, I can see even a local chef taking one of the classes to understand, for example, ceviche. I will show you a Peruvian ceviche versus a Mexican ceviche versus one from my country—they are all totally different. Then the final goal will be to do culinary trips and wine trips—to Spain, to France, to Argentina.

With your background—the wine, the accent, the Hispanic cooking influence—I imagine you’re excited to bring something different to an American audience. Is that part of what you enjoy?

Yes, but I also enjoy the opportunity to help communities. I have the opportunity to spread the word about healthiness. Sometimes we think, because we live in great cities, that everyone gets information. It doesn’t matter if the show that I’m doing is for five people or 3,000 people, there is always a mission to deliver a message.

Back to wine for a moment: Is it difficult to develop an educated palate for wine?

Practice will get you there. Don’t push yourself to look for an aroma or look for a flavor—if [a label] says chocolate, close your eyes and try to connect with that chocolate. Chefs are supposed to have more delicate senses, but it took me a while with wine. [At first], I was always tasting with someone who had more experience than me.

So, despite your expertise, you’re not a wine snob?

I’m not, and I never will be! (Laughs.) Part of it is to enjoy the time that you [spend] tasting the wine. I don’t drink wine; I taste wine. At the end, the best wine is the one that you like.